The EU FP7 project GRIP has developed key technologies for CFD based design of Energy Saving devices as well as production and installation / retrofitting of Energy Saving /Propulsion Improvement Devices. The concept is applicable to both new vessel designs as well as retrofits. It has been applied to a full scale demonstrator (54000 tdw bulk carrier) and demonstrated 6.8% power / fuel savings during consecutive sea trials.

The FP7 project GRIP (Green Retrofitting through Improved Propulsion) has been launched to address industry needs for improving on-board energy consumption and emission reduction by installing Energy Saving Devices (ESD) on existing ships. The high demand for retrofitting is largely driven by four factors: the reduction of CO2 emissions, the fluctuating high fuel prices, effective regulations and the lifetime extension of existing ships. Although there is a remarkable market penetration already, it often remains highly uncertain whether these devices actually improve the performance of the complete hull-propeller system, and if so why. Some devices showed great promise in model tests, but failed in full-scale validations. For other devices, manufacturers claim proof of large improvements on real-size ships, but these claims cannot be verified by independent observers. Therefore, there is an urgent need for independent studies on the potential energy saving of such devices. The GRIP project addressed exactly this problem in a holistic approach.

As explained above, a large variety of Energy saving – Propulsion Improvement Devices – already exist and practically all ships lend themselves to conversion / improvement by using an appropriate device. But not all of them are suitable to each type of ESD and even if a suitable generic device has been identified, a customisation of the design is required to adapt it to the individual vessel’s characteristics, in particular the wake field and the propeller.

To circumvent the difficulties associated with the initial choice of the most suitable ESD, GRIP has developed in a first step an Early Assessment Tool (EAT) to provide guidance with the appropriate selection of ESDs. Therefore data from suppliers, literature, CFD calculations and trial measurements of earlier projects were collected to provide a sound basis. The EAT is the first major deliverable of the GRIP project. This web based tool for public use is aimed at technical staff of shipowners, consultants and others and gives guidance during a preliminary selection of ESDs. The tool gives a general overview of the field of application for a number of ESDs, based on charac-teristic ship data.

One of the reasons for the reluctance of ship owners to invest in ESDs is the uncertainty in the performance gains at full scale which is caused by a number of factors. A chief factor is that the level of uncertainty associated with the theoretical predictions is often larger than the improvement itself. Therefore accurate model scale tests need to be extrapolated to full scale values which in turn have associated uncertainties. The GRIP project removed these uncertainties through the application and validation of computational tools applied to full scale conditions.

Advanced CFD and structural analysis techniques available were used to set up a design procedure including the analysis of the hull-propeller-ESD interaction. An example process is shown in the following figure. The GRIP procedure accounts for the interaction of hull, ESD and propeller by combining advanced CFD and structural prediction tools to assess the combined performance of propeller and ESD in the ship’s wake. The CFD tools used vastly benefitted from prior developments in earlier EU funded projects, in particular the FP 6 project VIRTUE. They are now capable of capturing small deviations in the flow caused by the presence of ESDs and hence give an accurate result of the efficiency improvements to be expected from a new ESD.

In addition, CFD also delivers the load inputs for the structural analysis. In GRIP a new methodology for the structural assessment of ESDs has been developed to enhance future classification regulations. These consider particularly dynamic loads including different causes of vibrations which are used to perform fatigue analysis.

An actual ESD design case has been conducted for a reference ship. GRIP partners entered a contest to provide the most promising ESD solution for a new handymax bulk carrier built by partner Uljanik shipyard (ULJANIK BRODOGRADILISTE DD). The proposed solutions included a pre-swirl stator (PSS), a pre-duct and a rudder bulb.

A thorough analysis cross-checking the three solutions revealed the PSS to be most promising. This device was further analysed and prepared for full scale testing. After hydrodynamic optimisation structural analysis of the selected design followed using the methodology developed in the project. The design wave and the corresponding maximum expected forces on the PSS fins have been predicted and Finite Element Analyses have been performed to validate the scantling. This was compared to class rules.

Once the design was completed the PSS was, manufactured and installed on the vessel following careful alignment in situ and 3D scan measurements of the actual geometry were performed in the dry dock. With this configuration a second sea trial was performed repeating the first one only two weeks before in almost similar conditions. 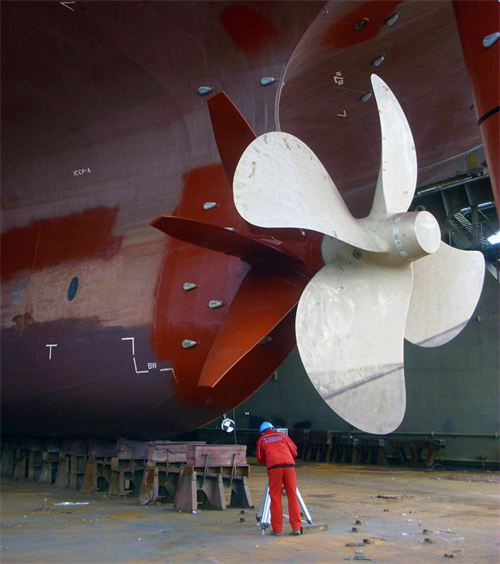 Manufacturing and Installation of Pre-Swirl Stator at Uljanik Shipyard

The second sea trial with the PSS installed and otherwise unchanged conditions confirmed power savings of 6.8% and thus proved the validity of the GRIP design methodology.