This proposal brings forward a passive bistatic radar (PBR) based on Galileo transmissions for maritime surveillance. The exploitation of existing transmissions for PBR applications is becoming increasingly attractive due to their low costs, covert operation, and reduced environmental pollution.

Galileo is particularly suited for the proposed task since it comprises a satellite constellation, ensuring that any point on Earth is permanently illuminated by a number of satellites. This feature potentially enables surveillance both in coastal areas and the open sea. In this proposal a ground based receiver is considered for coastal monitoring while the receiver is placed on mobile platforms to assure open sea surveillance. The feasibility of such a system will be evaluated and the required techniques will be studied and developed in order to propose an original and innovative solution to solve a major European problem using European technology.

The main objectives of the project are:

The first objective has been pursued firstly, in the context of WP1, by means of a theoretical feasibility study on Galileo-based radar, analysing the power budget, i.e. the detectability of maritime targets against noise or sea clutter.

The second objective, i.e. the Industrial Design of a final Product, is being pursuing by following the Systems Engineering approach, led by Aster to support the various engineering activities, beginning in the conceptual design phase and continuing throughout development and later life-cycle phases.As for the third objective, the Development of a Demonstrator, it has been started the development of the spyGLASS receiver, as well as the subsystems that will provide the ground truth information to validate the processing results and integrated surveillance vehicle that will host the spyGLASS receiver. 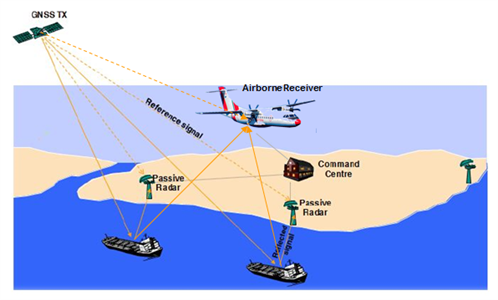